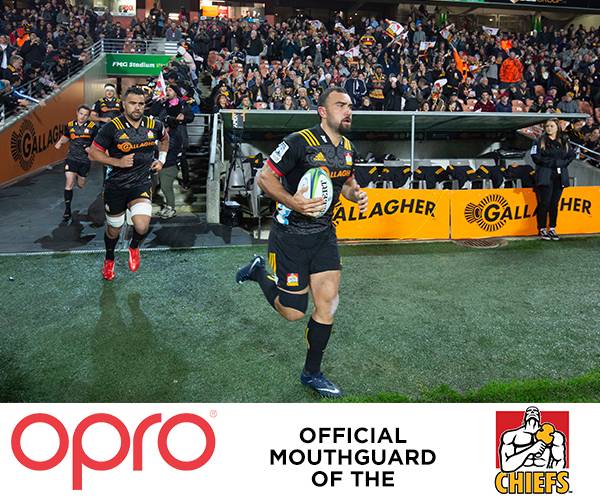 OPRO, the world’s largest manufacturer of the most technically advanced mouthguard, today announced the renewal of their long-term partnership with professional Super Rugby team, the Gallagher Chiefs.

Hailing from Hamilton, New Zealand and two-time Super Rugby Championship winners, they became the first ever Super Rugby franchise to beat an international team in 2016 against Wales.

Containing many members of the current All Blacks squad, the renewal cements OPRO’s stance as the mouthguard of choice in New Zealand, also the Official Supplier to New Zealand Rugby themselves and three of Super Rugby’s five professional teams.

As part of their partnership, OPRO will continue to supply the Gallagher Chiefs with the very best in mouthguard protection.

OPRO Chief Executive Officer David Allen commented: “We are delighted to extend our partnership with the Gallagher Chiefs as one of the most prestigious clubs in the world.

“OPRO have been involved with the sport of rugby for over 20 years. New Zealand are the most acclaimed nation in World Rugby and we’re proud to provide their teams with the ultimate in terms of comfort and protection through our mouthguards”.

Chiefs Rugby Club, Commercial Manager, Sean Austin also commented on the partnership renewal: “It is great to be able to extend our partnership with OPRO. The safety and wellbeing of our players is paramount and wearing OPRO mouthguards is an important part in achieving this”.

Founded 20 years ago by dentist Dr Anthony Lovat, OPRO is the world’s most technically advanced mouthguard company and a leading pioneer in oral protection. Through the development and deployment of cutting-edge technology and the use of innovative design and production methods, OPRO has been at the forefront of protecting the safety of athletes at all levels, across a range of different sports, for more than two decades.

All OPRO mouthguards are legally CE certified and in 2007 the company was awarded the Queen’s Award for Innovation in recognition of its ground-breaking work in the field of oral protection.