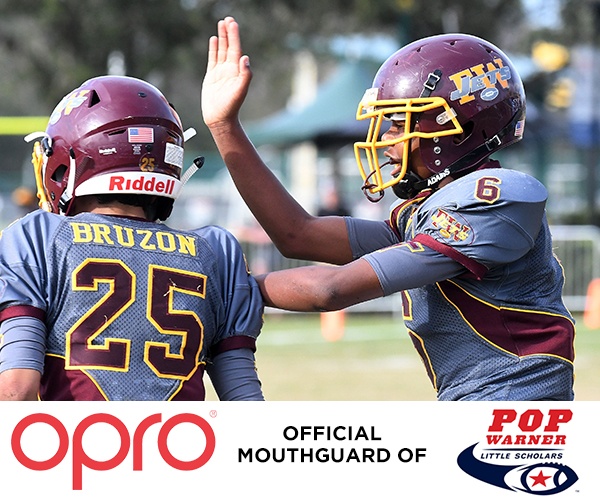 OPRO joins an elite number of partners such as USA Football, NFLPA, Dick’s Sporting Goods, Wilson, and Gatorade in supporting not only the league, but the National Championships each year for 64 teams in 5 age/weight categories held in December at the ESPN Wide World of Sports complex at Walt Disney World. Along with being “Official Mouthguard of Pop Warner” OPRO will also be an “ Official Youth Development Partner of Pop Warner Little Scholars” supporting many programs across the country.

David Allen, Chief Executive Officer of OPRO commented “We are delighted to partner with Pop Warner Little Scholars as their official mouthguard provider, not only allowing access to the best fitting and most protective mouthguards but giving athletes and parents exclusive offers to purchase that will allow OPRO to make financial contributions to the national and regional leagues. This is an exciting time for OPRO as we continue to bring innovation to football in the USA.”

Founded in 1929 and headquartered in Langhorne, PA, Pop Warner Little Scholars is the nation’s oldest youth football, cheerleading and dance organization and the only youth sports organization that emphasizes academics as a prerequisite for participation. Pop Warner participants enjoy the opportunity to learn and compete in their sports in an atmosphere that emphasizes fun, academics and character. For more information on Pop Warner and its programs, visit popwarner.com or follow Pop Warner on Twitter @Pop_Warner, Facebook @PopWarnerLittleScholars, Instagram @popwarnerlittlescholars and Snapchat @popwarner1929.

Founded 21 years ago by dentist Dr. Anthony Lovat, OPRO is the world's most technically advanced mouthguard company and a leading pioneer in oral protection. Through the development and deployment of cutting-edge technology and the use of innovative design and production methods, OPRO has been at the forefront of protecting the safety of athletes at all levels, across a range of different sports, for more than two decades. OPRO is the official mouthguard partner of a number of professional sporting organizations, including the Ultimate Fighting Championship (UFC), USA Wrestling, USA Rugby, USA Taekwondo, New Zealand Rugby, Football Canada, Wrestling Canada Lutte and the GAA. All OPRO mouthguards are legally CE certified and in 2007 the company was awarded the Queen’s Award for Innovation in recognition of its ground-breaking work in the field of oral protection by Queen Elizabeth II at Buckingham Palace, England.